Menu
Book A Tour
Back to all

Knowledge workers have watched design trends oscillate from one extreme to the other for decades. History shows that offices originated as far back as the 8th century B.C. with the Tabularium used by the ancient Romans. By the 5th century, A.D. Medieval Monks were using what closely resembled today’s cubicles, which they called a Scriptorium.

However, it wasn’t until the early 1700’s that the first dedicated office building would appear. In London, the Old Admiralty Buildings were built in 1726 to store paperwork for the Royal Navy. They had private spaces for meetings, like the Admiralty Board Room, which is still in use today. The UK was a pioneer in office space design, commenting that:

“for the intellectual work, separate rooms are necessary so that a person who works with his head may not be interrupted; but for the more mechanical work, the working in concert of a number of clerks in the same room under proper superintendence is the proper mode of meeting it” – Sir Charles Trevelyan

While maybe not as conducive to collaboration as some of today’s innovative workspaces, this would hold as one of the more effective workplace design trends for the next 200 years.

With a swing of the pendulum, the early 1900s saw the birth of the open-plan office concept. The downsides of this design were not the fault of those that came up with the idea. The likes of Frank Lloyd Wright and other 20th century architects aspired to liberate homeowners and office dwellers from the confines of boxes through the flexibility of open floorplans. Fascism was taking hold at this time, and they hoped to connect people during a time of frequent division. Unfortunately, companies popularized their ideas because of the ability to stuff more people into an open office space.

Cubicle Farms, the Worst of Both Worlds

Introduced in the mid-1960s as a cost-cutting measure to improve productivity, cramped office cubicles quickly gained popularity in the business world. They were not as claustrophobic as the sardine-like, assembly-line style offices of the early 20th century, but they posed a new problem.

The cubes isolated workers without removing much of the noise distraction. You might think the chitter-chatter of your coworkers isn’t much of a problem, but an employee productivity study by British Gypsum in 2015 found reducing noise in the workplace increased the ability to focus by almost 50 percent and decreased stress levels by almost 30 percent.

For the last fifteen years, cubicles have slowly disappeared from the work environment as open space plans have gained resurgence, especially in the tech industry.

The most extreme example of the modern open office has to be within Facebook’s Menlo Park headquarters designed by Frank Gehry. At the center of this building lies ten acres of beautiful open office space where over 3,000 employees work. It’s an enticing concept that features a rooftop of parklands, gardens, and redwood trees, as well as cafes, restaurants, and quaint “village” spaces to have meetings. But it’s not working as intended.

The open office model has been replacing the cube system as companies like Facebook and Google aim to improve collaboration and the exchange of ideas. However, workers are more stressed and have been shown to collaborate less in open workspaces. In fact, a Harvard Business Review study from 2019 discovered that when a company switched to an open office, face-to-face interactions decreased by 70% — employees communicated electronically instead.

The British TV special “The Secret Life of Office Buildings” ran experiments that showed open offices might create more opportunities for collaboration, but do so at the expense of “massive distraction”

“If you are just getting into some work and a phone goes off in the background, it ruins what you are concentrating on,” said one of the show’s neuroscientists

The common consensus is that open spaces lead to distracted working and frequent interruptions, which promotes stress and prevents deep work.

In the bestselling workplace productivity book “Deep Work”, Cal Newport argues that deep work — cognitive tasks that put significant strain on your mental reserves and require uninterrupted focus — is both important and increasingly rare in the modern workplace.

The deep work concept is paramount as computers automate more and more routine tasks because it’s the people who can quickly master complex, cutting-edge skills and consistently perform at high levels that will win in the new economy. And this is the kind of learning that requires deep work.

“When people are switching contexts every 10 and half minutes they can’t possibly be thinking deeply. There’s no way people can achieve flow. When I write a research article, it takes me a couple of hours before I can even begin to think creatively.” – Gloria Mark, Professor in the Department of Informatics at UC

In an ironic pursuit for increasing collaboration and ideation, companies have been slow to realize the impact open spaces have on achieving such focus. It’s impossible to go 10 minutes without an interruption and get into the flow that Gloria Mark mentions. This might not matter, however, as more workers take control of their work environment, choosing where and how they want to work.

The acceleration of this work revolution is in large part due to the stay-at-home orders imposed by Covid-19. According to a 2-year study of 800,000 employees, working from home was just as productive as working in the office – possibly more so. Since knowledge workers are able to complete a majority of their tasks remotely, it begs to question why people need to go into the office every day.

You might even ask if they need to go into the office at all. For some, this is an ideal solution, but not everyone has the same access to reliable internet or a dedicated space to remove distractions. Based on a PRC survey of 5858 adults working from home, 32% found it difficult to get their work done without interruptions. From a deep work perspective those interruptions, even if minor, is devastating to productivity.

But there are some other less obvious challenges that come with work-from-home.

Some of the most common issues they’ve seen from mandated work-from-home include career stagnancy, isolation, micromanagement, and burnout. –Laurel Farrer, founder of the Remote Work Association

Work progress is often measured by how much we produce, which is why increasing productivity has always been a primary goal in designing work environments. Putting an emphasis on limiting distractions to promote deep work sometimes overlooks the importance of socialization in the workplace. The isolation felt by many in 2020 while working from home is an indication that social interaction is an essential component of the work environment and prevents remote work from being a permanent solution.

The Pendulum Settles With Coworking

After a long history of workplace design that’s battled to balance workers’ productivity with collaboration and space utilization, flexible coworking spaces are beginning to come out on top. Most modern coworking spaces offer a hybrid of open-concept workspace with private offices that creates a work environment where both deep work and serendipity prosper. These spaces have the added benefit of diversity, often attracting intellectuals from different industries and backgrounds.

The idea to blend open and closed space isn’t a new discovery, but it is the first time such hybrid designs have started to see popularity. One of the first designs that took this innovative approach was Bell Labs.

The insight for Bell Labs’ construction can be attributed to director Mervin Kelly, whose goal was to intentionally encourage interaction amongst its mix of talented scientists and engineers. Instead of segmenting the buildings by department, as office campuses traditionally were in the early 20th century, they were instead connected by long, wide hallways. These had to be traversed to navigate the buildings, so chance encounters with colleagues and acquaintances were virtually unavoidable.

As Jon Gertner said in a 2012 opinion piece for The New York Times, “a physicist on his way to lunch in the cafeteria was like a magnet rolling past iron filings.”

More recent designs are taking advantage of big data to model “collision coefficients” and “focus time” based on a number of design variables to better optimize closed vs. open space. This has led to modern office marvels of today such as The Bridge at Cornell NYC Tech and 10 Hudson Yards in NYC.

Continuing the Pursuit of Deep Work

As we enter an era of work that empowers the knowledge worker to choose their own office environment, it’s up to you to prioritize thinking deeply. With office spaces that balance collaboration with focus becoming more widely available, the challenge that remains is overcoming self-distraction.

Workers continue to spend an average of six hours on email in a day, according to one survey. Another study found that the typical worker checks email 74 times a day! Worse than email is instant messaging, which has the potential to interrupt multiple times per minute. These tools that are designed to increase team productivity might be doing much more harm than good by hindering personal productivity.

Here at desk, we’ve embraced a culture that leaves room for deep work by saying goodbye to hyperconnectivity. We turn off our notifications and check them periodically instead.

When immediate responses are expected, your team’s attention will never be dedicated to the task at hand because of the non-stop interruptions. That means NO ONE on your team has the opportunity for deep work. And if deep work really is what it takes to be the winners in the new economy, you’ll be left in the dust.

Are you trying to figure out which coworking space is right for you? Drop us a line and we’d be happy to help. OR, come see us in person at our new space in New Brunswick, NJ!

How Management Agreements Can Quickly Fill Your Empty Floors

A collection of resources to help support AAPI communities

When it comes to the manufacturing industry, workers must follow a standard work process to produce quality products efficiently and with consistency. Standard work is 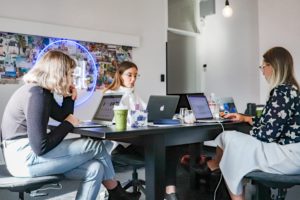 With flexible workplace options on the rise, more and more employees are choosing to work from a coworking space or similar shared office environment. These 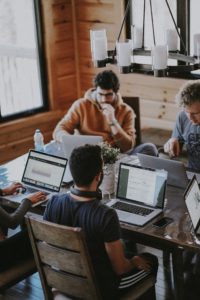 How To Pass Time At Work Through Productivity

There are times when you feel tired and bored at work. You feel like there’s nothing left to do, or you have finished all your

Drop Us A Line